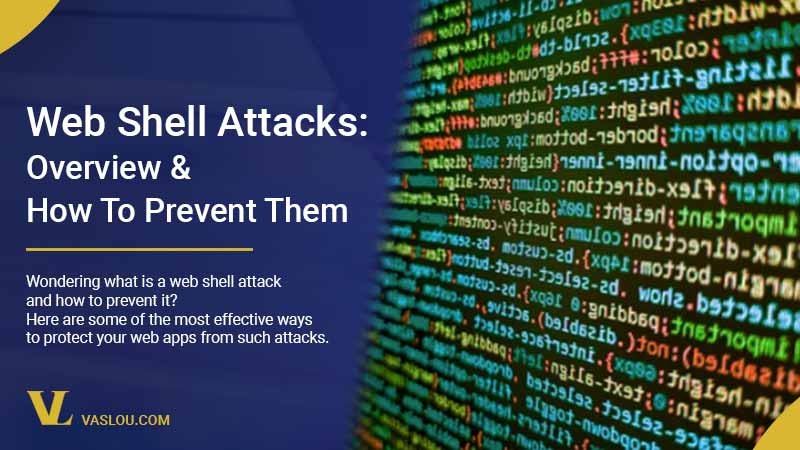 The modernization of businesses and increased Internet usage have led to massive cyber threats. Hackers are now using advanced ways to disguise and expose user data. However, one cyberattack which has never been out of the fashion for cyber attackers is web shell attacks.

According to Microsoft, between August 2020 and January 2021, there were 140,000 web shell attacks compared to 77,000 a year before that period. So, you can understand that it is not an old attack forgotten by cyber attackers but has become more brazen with time.

For example, one of the most popular web shell malware that targets Microsoft Server Exchange is China Chopper. However, there are many other web shell attacks like China Chopper that you may encounter. So, what are these shell attacks, and how to prevent one for your systems?

Well, here we are with a discussion on web shell attacks and how to protect your systems against them.

What is a Web Shell Attack?

According to NSA, a web shell attack is a malware deployed through software by cyber attackers. Attackers can use it to implement corrupt system commands sent over HTTP and HTTPS.

Web shell attacks can cause severe risks to your data on the web server. Executing shell attacks needs a simple alteration or adding a specific file to the existing web application.

Hackers have continued access to a compromised network through such attacks. It uses the communication between a disguised channel and server to join the legitimate traffic.

Web shell malware is capable of evading security tools and anti-virus software too. Cyber hackers use web app vulnerabilities and upload specific files in the compromised systems to get backdoor access. In addition, shells can act as relay nodes for hackers who use them to extract data and execute arbitrate system commands.

Further, hackers chain several web shells across compromised systems and route the traffic from internal networks. Such attacks are not limited to internet-facing systems; they can even target your CMS for data extraction and admin controls of the web app.

Web shell attacks occur due to several reasons that include:

Hackers use multiple types of web shell attacks to inject malicious codes into the web app. Let’s first discuss the most popular one: China Chopper!

Now that we know what web shell attacks are and their types let’s understand how it works.

How Does a Web Shell Attack Work?

It is an initial phase where attackers leverage a backdoor vulnerability to gain access to a web server. Once they are in, it’s total control. After that, hackers try and plugin every loophole that can allow admins to gain back control.

Making changes in software or websites needs root access. However, web shell attackers exploit user permissions which are restricted. So, they need to escalate privileges that allow them to make changes in source code, reset access permissions and inject new malicious codes.

The next phase in a web shell attack is to route the traffic to targeted nodes. Attackers stay anonymous during this phase by accessing compromised networks. But, first, they analyze the routers, traffic sources, live hosts, and firewalls.

Such data allows attackers to plan their attacks on specific network targets. During these targeted attacks, hackers pivot several systems making them hard to trace.

Lastly, hackers connect multiple servers to a bot network, allowing them to control the system. A common recipe for DDOS attacks, attackers leverage the bot network to execute commands through a command and control server. Such a server is connected to a web shell and does not directly target the system but exploits valuable resources.

Now that we know how web shell attacks work and what they do let’s discuss ways to prevent them.

Web shell attacks are caused due to web application backdoor vulnerabilities that hackers expose. So, one of the most effective methods to prevent such attacks is to secure your web applications.

In other words, WAF protects your server against web shell attacks by ensuring that clients pass through a firewall. In addition, most WAFs operate through a set of security policies that filters malicious traffic from reaching the server.

Similarly, another critical approach that you can employ is securing the communication between your server and browser.

SSL/TLS encryptions provide secure communication between the browser and server to avoid man-in-the-middle (MITM) attacks. Hackers can use web app backdoor vulnerabilities to access networks and execute MITM. You can request an SSL certificate from a trustworthy certificate authority.

After thorough vetting, a CA will provide you with an SSL certificate, which is not just a sign of security but employs encryptions to safeguard against web shell attacks. The best aspect is the SSL certificate cost, which is considerably lower and fits right into your budget.

However, SSL certifications and WAF are not the only methods to protect your systems against web shell attacks.

For example, you can detect unusual, more significant responses or data exfiltration, recurring peak data access, and geographically disparate requests. These indicators are enough to devise a security plan against web shell attacks.

Think of an airport with multiple layers and security checks. A zero-trust network follows the same principle by using the zero-trust security model. Accessing data in a zero-trust network requires thorough verification and authentication of users. While conventional network approaches are hard to access from outside, once a user is inside the network, data accessibility becomes easier.

Hackers exploit this attribute of conventional network systems and change access permissions once inside the server. The zero trust model is based on a simple rule- trust no one! So, every user, whether inside the network or outside, needs to pass through rigorous authentication.

Web shell attacks are still the most popular choice for many attackers, so you need effective ways to detect them. Proper detection, identification of root cause, and prevention of such attacks need elaborate planning.

So, here are some approaches you can take along according to the type of attack and work. However, which method suits your system will depend upon specific requirements, so analyze the web app first.

Affiliate Disclosure: This post may contain affiliate links, and if you decide to buy any of the promoted products, I may receive a commission at no additional cost to you. By doing this, I might feel more inspired to continue writing on this blog. You can read our affiliate disclosure in our privacy policy. Hey, I'm Vasco. This blog will show you the best software tools and tips to boost your online business. The best way to learn is to teach, so I hope you find this blog valuable, as I'm always striving to select the best information and do honest reviews about the tools that can help your online business go forward.

Disclosure: This post may contain affiliate links, and I may earn a commission if you purchase any of the promoted products at no extra cost to you. This way, I may receive some motivation to keep this blog up and running. You can read my affiliate disclosure in my privacy policy.